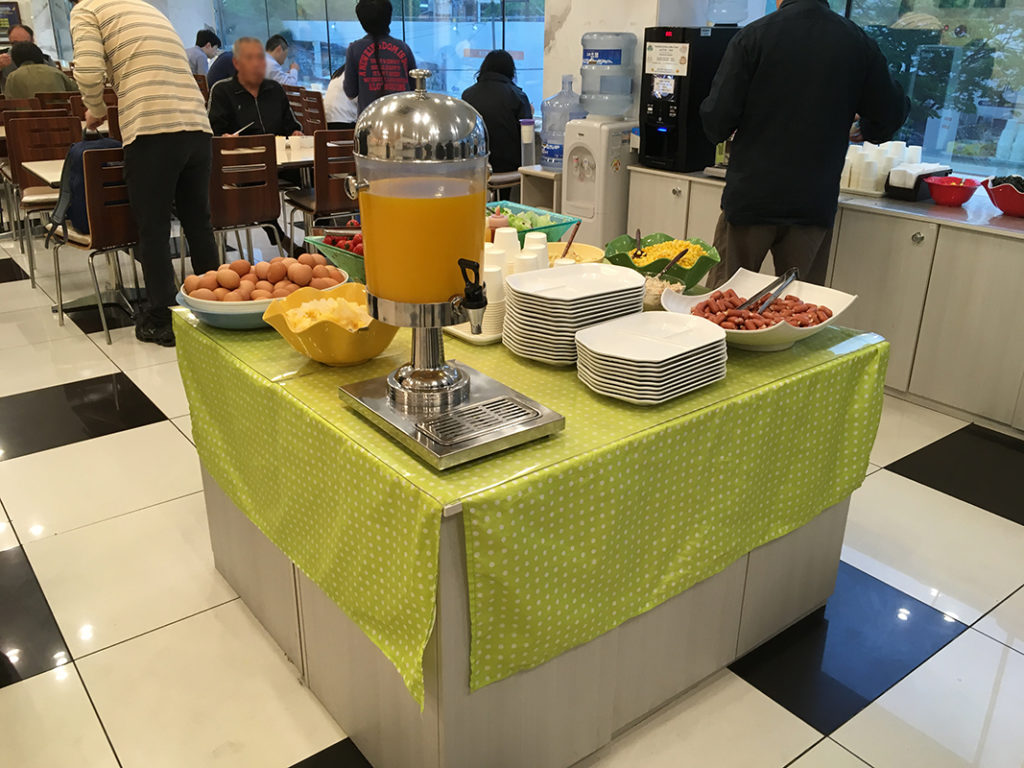 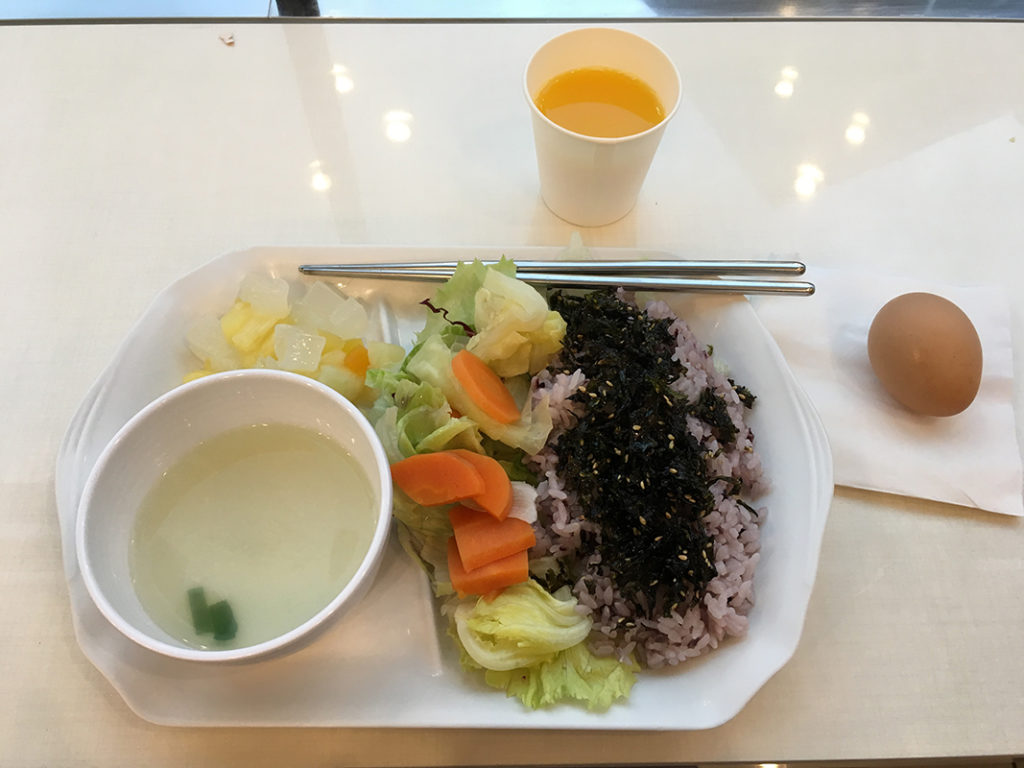 Packing went well, and I went down to the 2F almost right after 7:00. My ferry was to leave at 8:30, so I was supposed to be at the port by 7:30, but I figured it would be better to take care of breakfast first. While that was a wise decision, I ended up having to run. As I existed the back side of Busan Station, it was almost 8:00 and I knew there was no way I would make it without the Lord helping me.

I ended up getting there a little after 8 and booking it for the Beetle check-in. I didn’t even properly get a receipt for paying the port tax and stuff- the lady just quickly gave me my boarding pass and told me to go ahead through security because boarding was soon.

Thankfully I had no troubles other than being winded, and the security team seemed sorry for me and tried to help me out. Got through everything just fine and still had maybe 5-10 minutes before boarding started. Thank you, God! 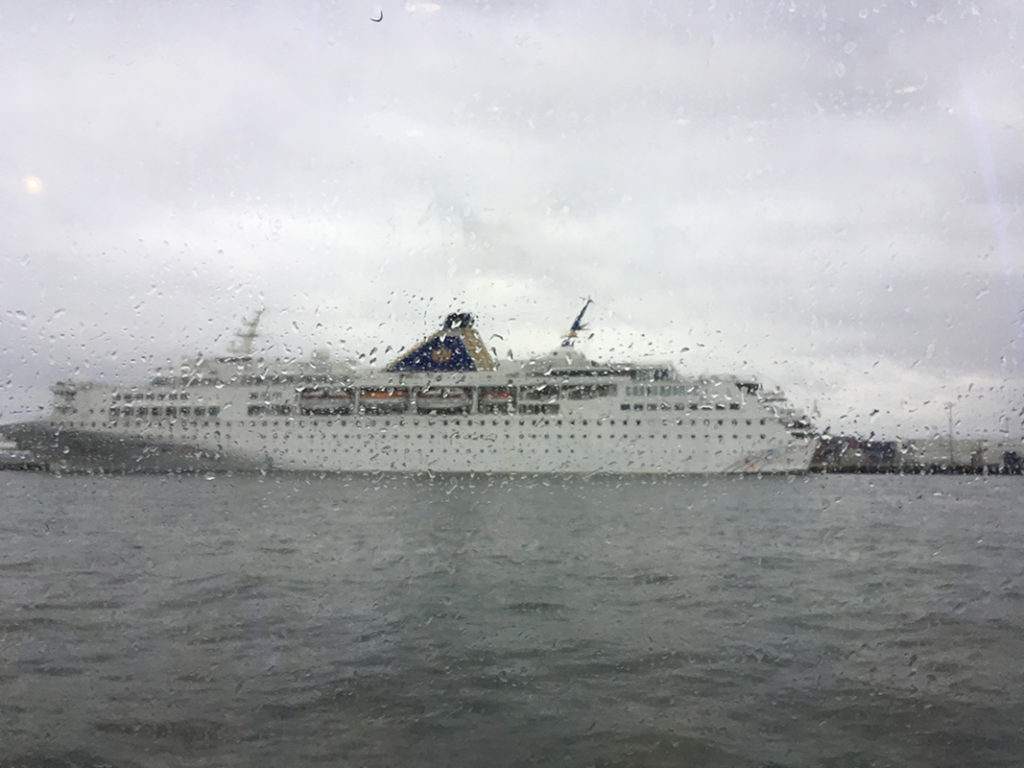 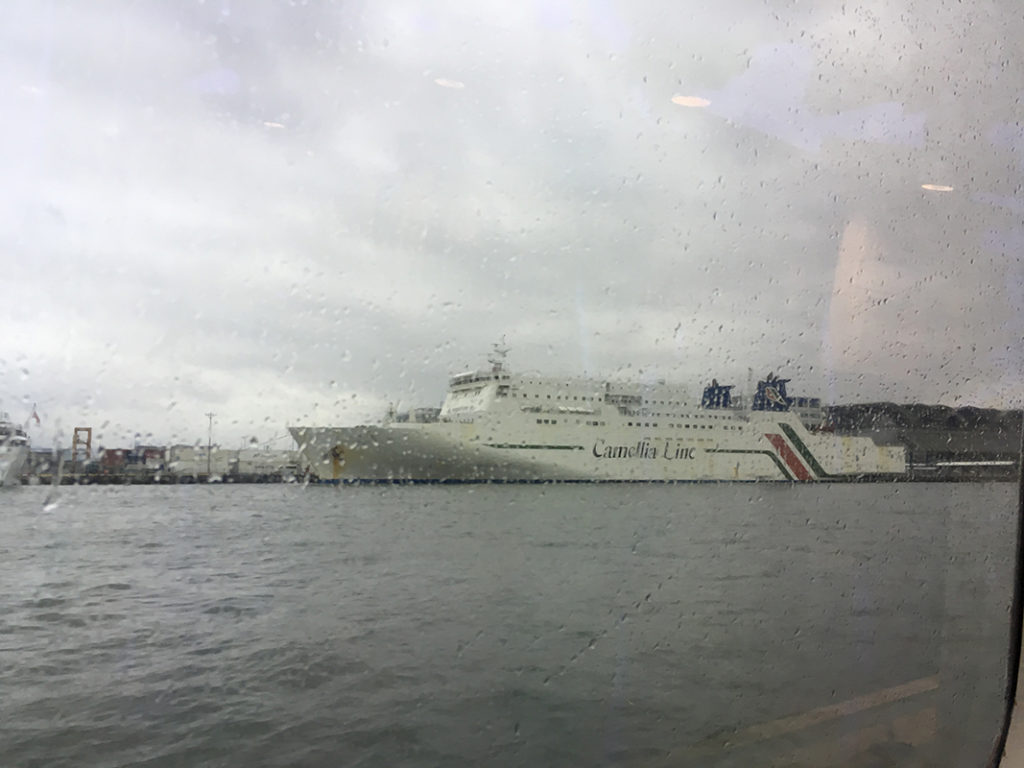 This time I was on the first level of the boat. Whether it was the lower level or the weather, the ride was definitely rockier than the previous one. Moreover, the wifi was spotty, so I just dozed or sang praise songs in my head while I waited for the trip to end.

The embarkation and customs forms were in English, so I didn’t make any mistakes this time. XD When I arrived, I went through immigration, where I was questioned on what I would be doing for 84 days and whether or not I had a return plane ticket. I told her that I would be staying with friends who live in Japan and we would be going traveling around the Tohoku region and then go to Tokyo.

I said I didn’t have wifi, but that I had a confirmation of my ticket, and showed her a screenshot of the same. She asked what LAX was, so I answered that it’s the Los Angeles airport in California. Thank God she let me through with that. I was thinking, I promise I’m not trying to work illegally! I have money for my stay! And a ticket home! I really do!

Customs was easy; I don’t think the woman really looked at my stuff. Then I exited the area and found myself back in the departure lobby where I had rented the wifi! So I returned that, and then sat down and collected myself before heading downstairs to exchange my won (no coins allowed) back to yen and catch a bus to Hakata Station.

I think I actually managed to catch the first bus I’d written down, which I hadn’t expected, but was nice! I definitely felt much better being back in Japan where I can understand much more than in South Korea! I really underestimated how knowing even some of the local language helps to take pressure off of you, but I definitely know that now. 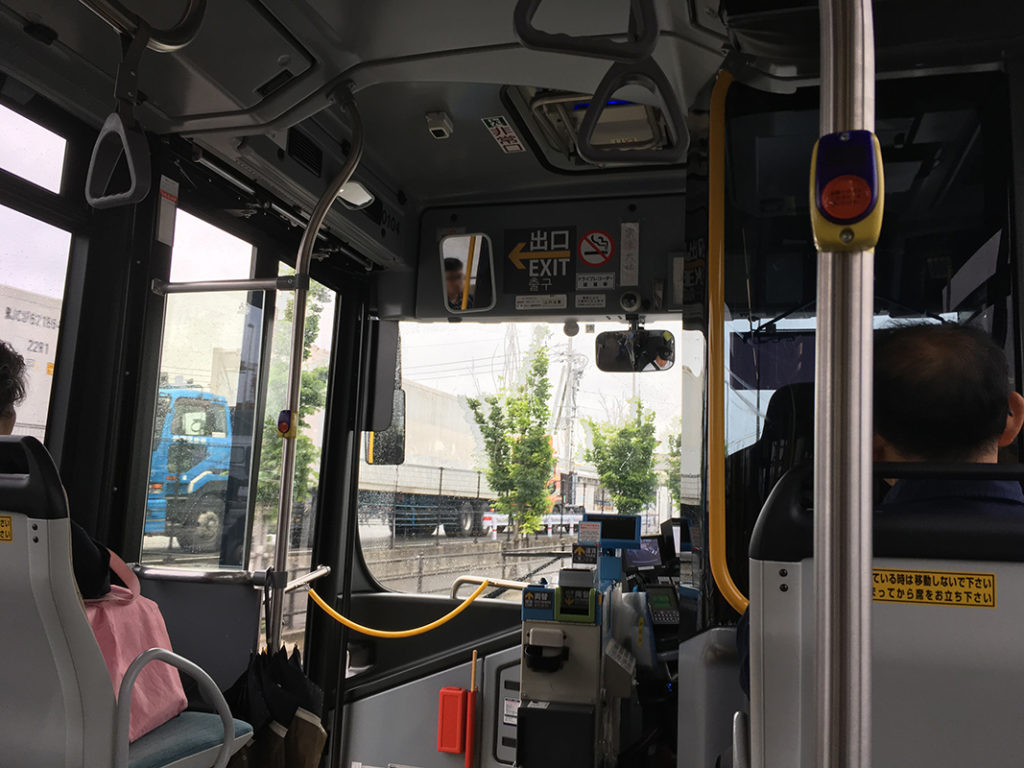 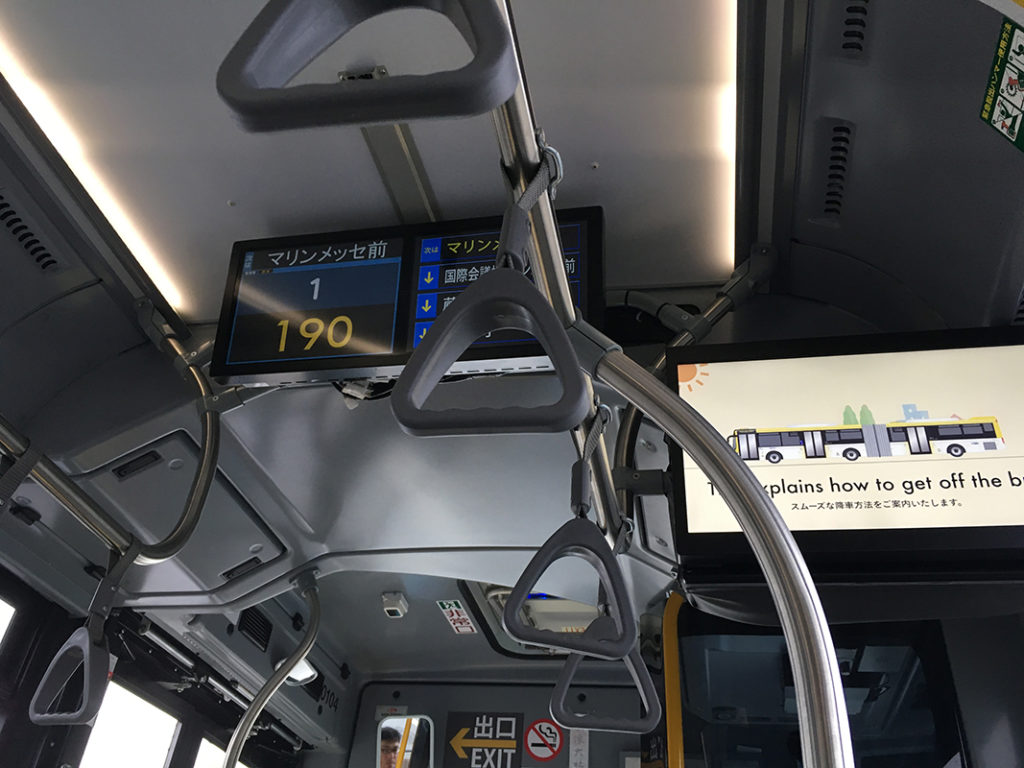 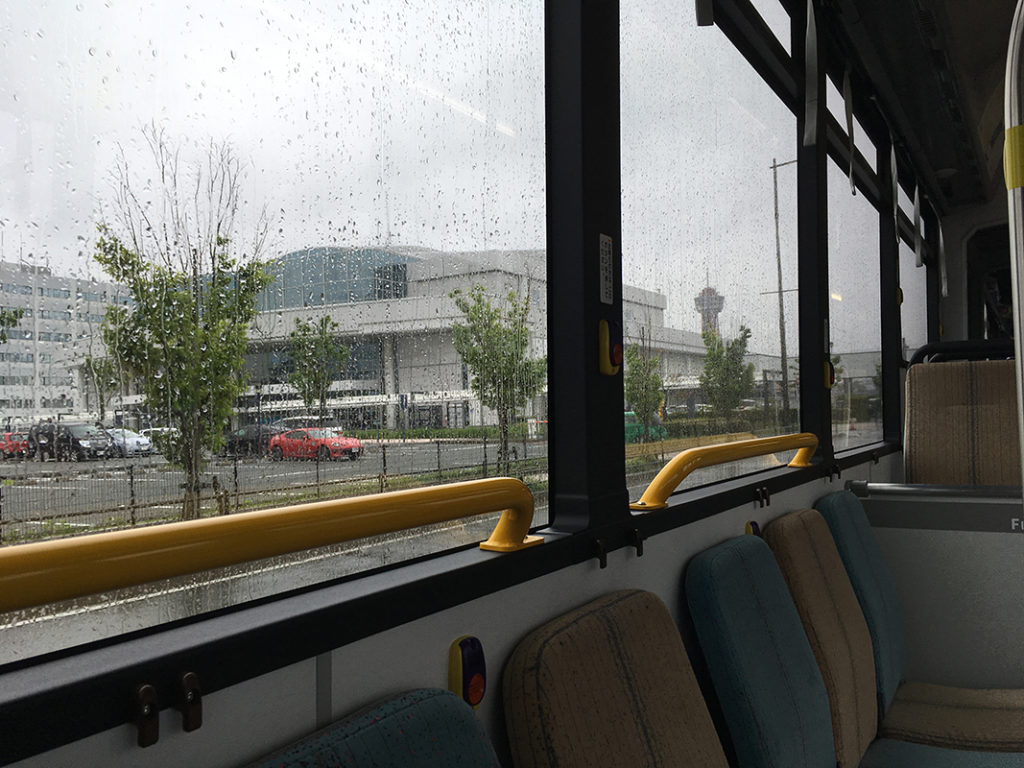 The Lord blessed me with smooth transportation and everything from there to the airport (bus to station to subway [Kuko Line for Fukuoka Airport] to airport). I had well over four hours before my flight, so I was able to take my time finding where I needed to go. I went to the ANA baggage check-in counter and got in line, but God reminded me that I had yet to actually prepare my bag for being checked, so I got out of the line and took it off my back so I could do that (zip the straps inside and put locks on the zippers).

The guy behind me almost moved up, but then he stopped once he realized I hadn’t moved up, but aside. I told him he could go ahead (we had an epic douzo war BUT I WON) and tried to take my time putting the locks on and everything. I have a bad habit of rushing when I feel like I’m in the way or disrupting something, including in security checks.

Once my bag was fixed up, I rejoined the line and soon made it to one of the counters, where I checked my bag, and then slowly made my way out of the area. I kept having to remind myself not to rush; I had plenty of time. So I found signs pointing out where I needed to go, and headed that way.

Security check was interesting. The space was very narrow, and strangely dim, and I didn’t actually have to take my shoes off, but I had to take out my laptop, remove my belt, etc. All my stuff went through fine, and they put my bottle of water in some sort of holder thing that I assume scanned it for explosive content. Once they checked my ticket, they gave me a slip of paper showing which gate my flight would be at.

I also had a baggage claim ticket, so by this time I had three pieces of paper. But I actually didn’t need my passport! I guess because I was flying domestically, that sort of check wasn’t necessary. 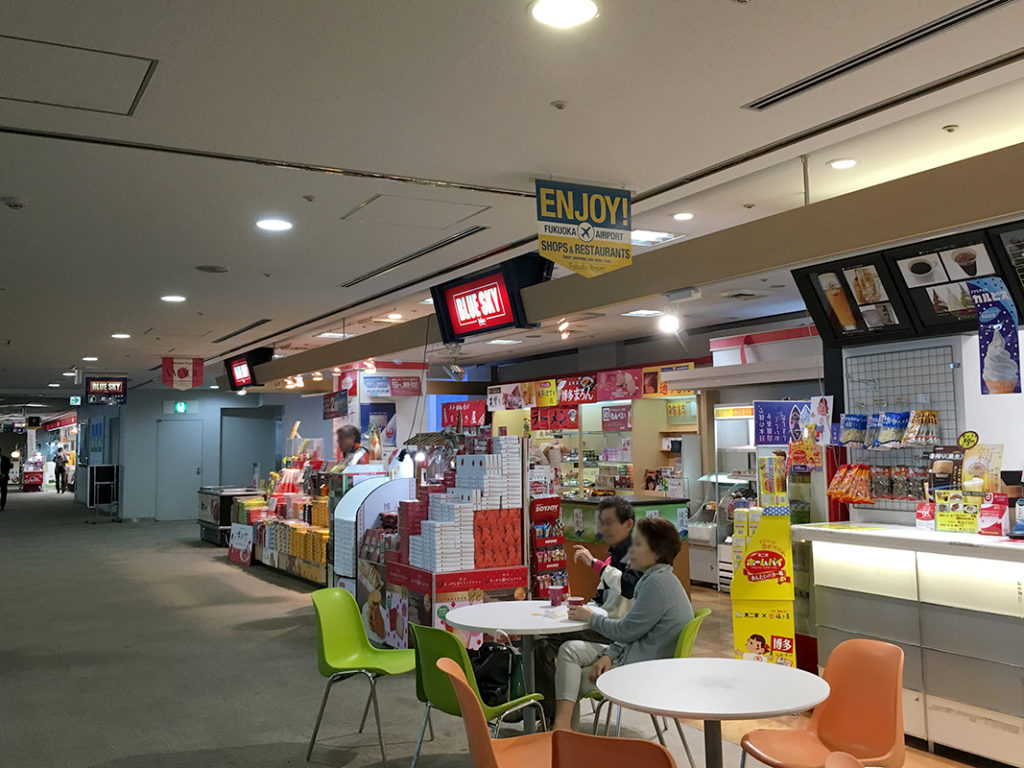 Again with the help of signs, I made my way towards the gate, stopping just short so that I could sit down at a table and eat lunch.

Lunch was pretty much the last of what God had prepared me with! Rice, greens, cereal, olive oil, salt, and pumpkin seeds. Once lunch was done, I went into the shop to look for Fukuoka omiyage, and came away with: 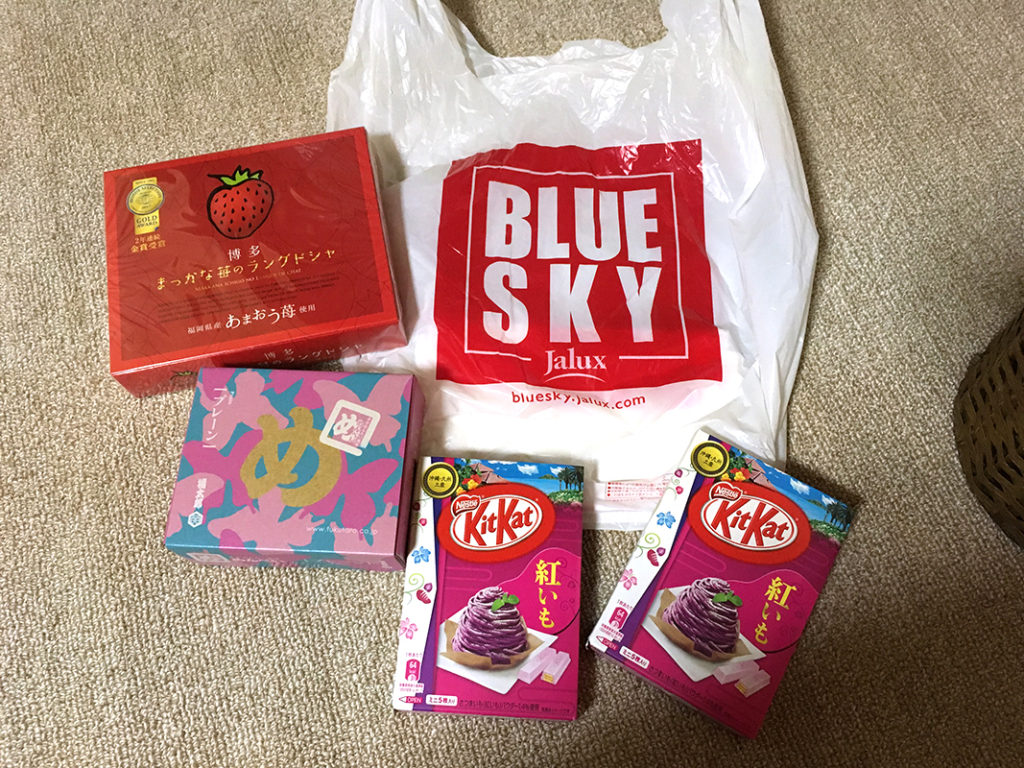 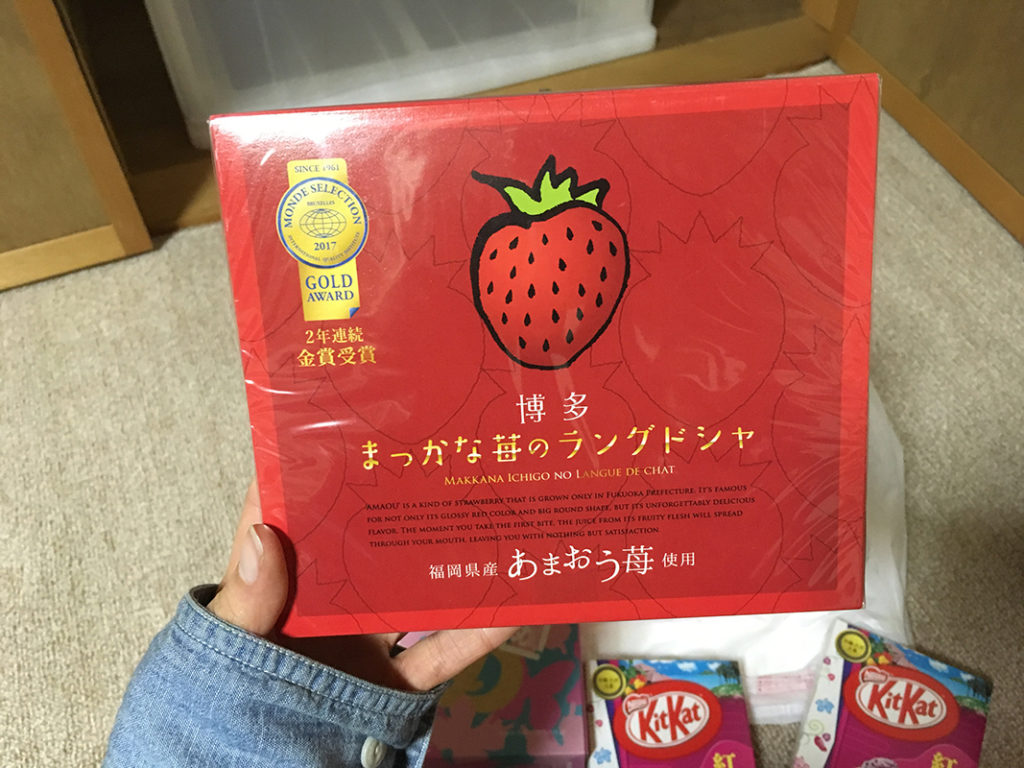 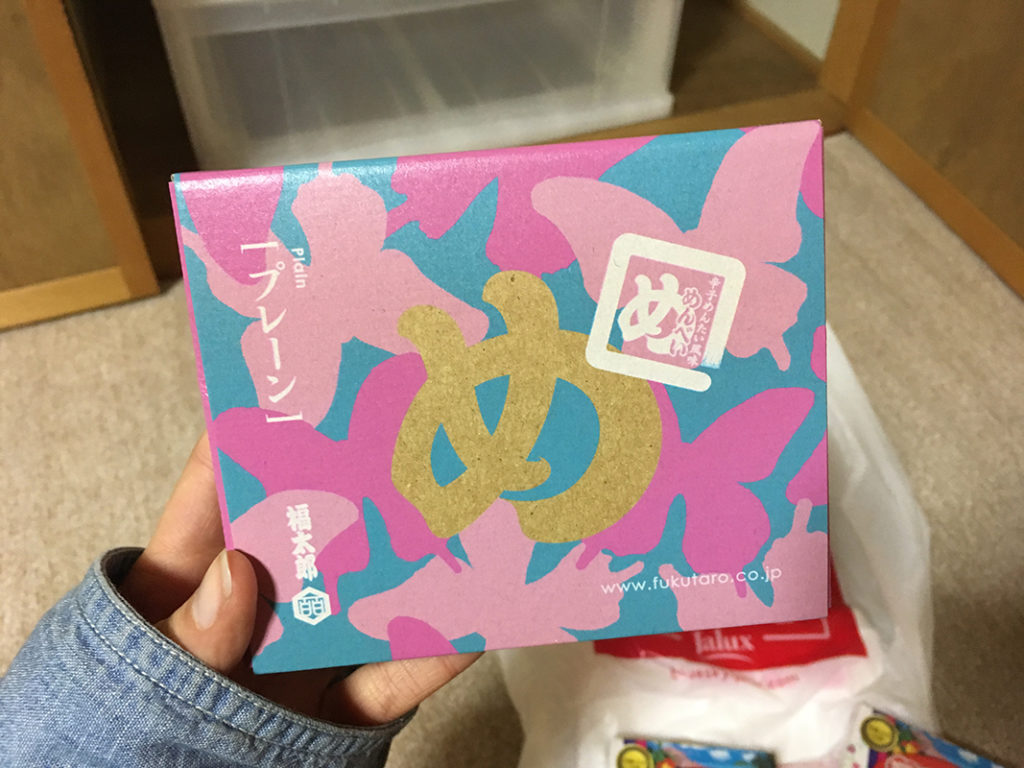 a box of mentaiko flavored senbei, 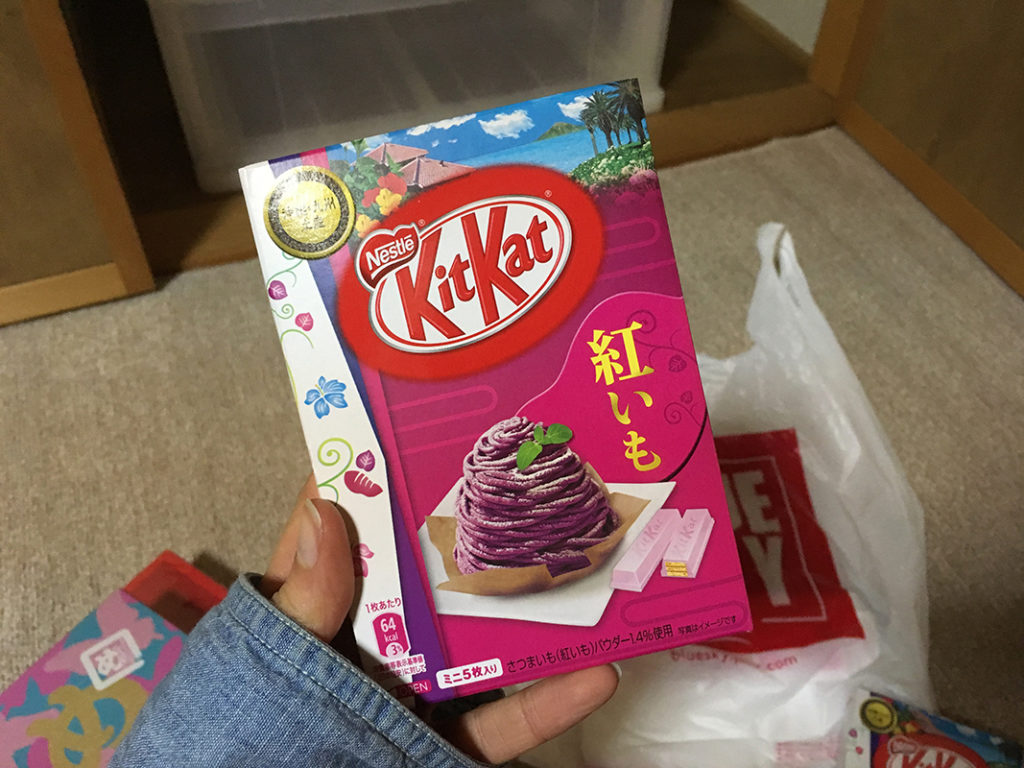 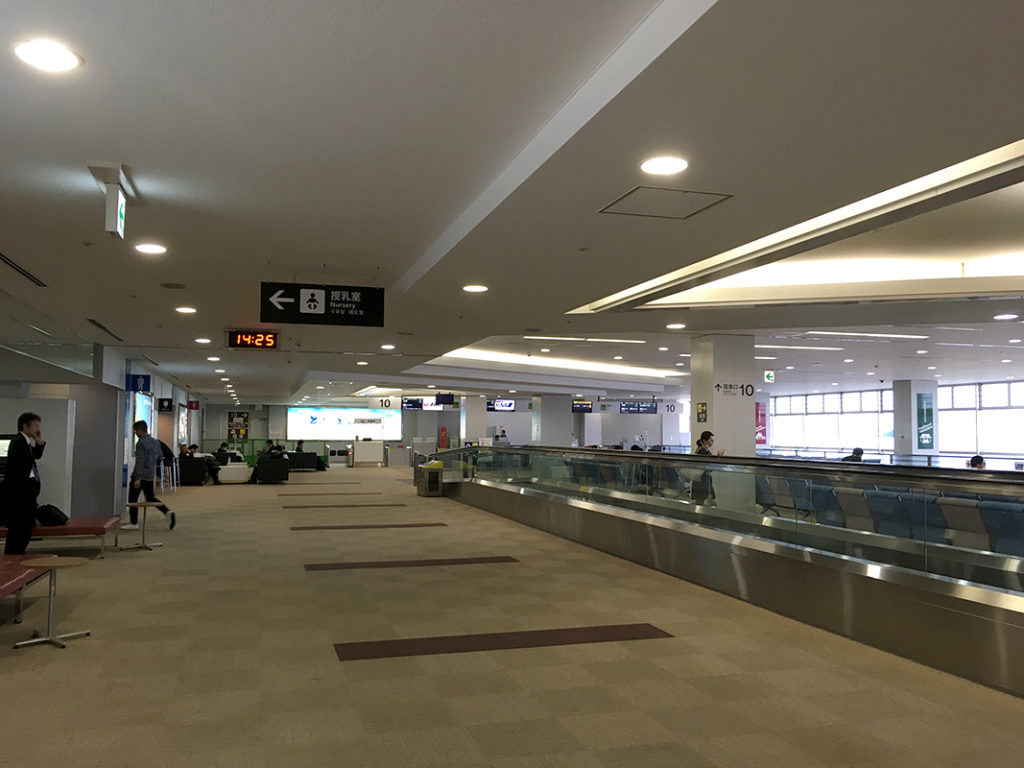 Later, I went back and got a bottle of water. Because water.

While heading for my gate, I walked past the tables again and found a Jesus yen on the floor near one! God is so good.

The wifi wasn’t working for anything but text, basically, so I read my friend Heather’s new Nozomi chapter (her fanfic) and did a bit of writing while I watched the electronic gate information screens to see what was happening with my flight. 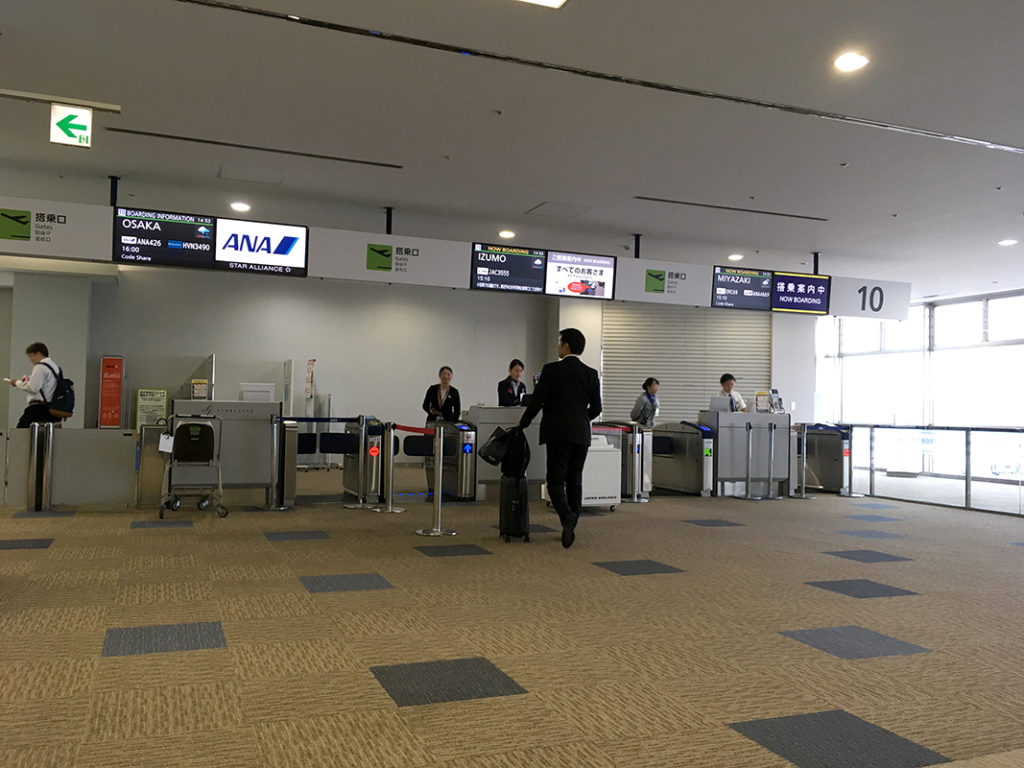 Other airlines use the same spaces, and when it comes time to board, one screen switches to show boarding specifics like which class and if it’s the final call or not. Then, sometimes the info screen switches to a totally different flight. The first time that happened, I almost panicked. Then I saw my flight had simply switched to a different screen. But the second time it happened, my flight disappeared altogether.

I chose to just trust God and wait it out. And sure enough, my flight reappeared later. Phew. The only thing that happened was a five-minute delay in boarding and departure because the plane arrived a bit late. All the staff serving that boarding gate bowed a few times in apology during the announcement.

When the staff members are on the outside of the gates (where the passengers are waiting to board), before they go behind them, they turn around and bow to the waiting passengers. They do this every time. It’s very interesting. Also, the women all run a certain way, delicate-like. It almost looked like some of them were annoyed that they “had” to do it, though I’m not sure that’s actually a requirement; it may just be the restriction of their skirts.

Often, a staff member would also go out into the waiting area, sometimes with a sign, and call out to let those waiting know that a certain flight was boarding; i.e. “If you’re going to Sendai, come this way.”

At boarding time, I scanned my boarding pass barcode, and was given a bus ticket and…placard? I’m not sure what was. It reminded me of those things you get at restaurants sometimes to take to your seat, but it just said “BUS” on it. Then came the interesting part! All the passengers boarding from this particular gate, including me of course, had to exit through what seemed more like a back door, and walk down some winding, wet stairs—though thankfully they were covered, which provided some protection from the rain—and then board a bus. The bus took us to our plane, and we boarded via some more covered stairs. At the entrance were some towels and candy, but I took neither.

I actually almost slept some on the flight. It was the “my eyes are closed but my mind is going and I’m dozing but not sleeping” kind of not-sleep. A guy across the aisle from me was apparently sick, as he had a patch inside his face mask and he sprayed his throat with something partway through the flight. Seeing that prompted me to put on my own face mask and remind myself to take an Inner Defense capsule (a powerful sickness-fighting supplement) as soon as I arrived at D-House!

I met John and Susan Edwards just outside baggage claim at Sendai Airport. They’re both lovely people and John is hilarious with his witty words and jokes. I can hardly believe that these long 2.5 weeks by myself are already over, and here I am, in Sendai, mission trip officially starting.

We went to a local restaurant for dinner (Joyfull), which for me was a Mexican salad (minus the chicken) in a corn tortilla bowl. Then we stopped at a local supermarket called York Benimaru and Susan ran in to get some almond milk for me. On the way “home” we talked about me and what I knew about the other two interns who would be arriving the following day, and about the tsunami on March 2011.

It’s pretty amazing to think about how much of the area was underwater, devastated by either the earthquake or the tsunami that followed. A raised highway is one thing that protected much of inland Sendai from the waves, and John explained how the city is planning to build another one closer to the shore, and then make everything on the sea-facing side into parks and similar things.

Temporary housing is not so much a thing anymore, but rice paddies were filled in to allow for building, and now many of the families who were in those temporary houses are now in these permanent ones. That’s a praise!

Back at D-House, I chose the upstairs tatami room (covered with carpet to protect the tatami) to be mine for the term. After taking some of my vitamins (including that Inner Defense) I headed up to bed… 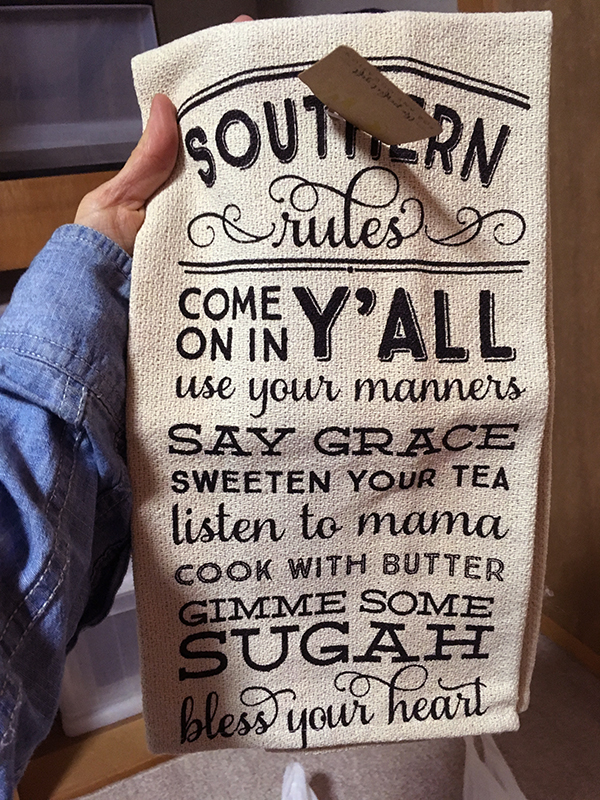 But I wasn’t all that sleepy for some reason, so I ended up sorting out my stuff and arranging my room before I actually slept. Here are some of the omiyage (souvenirs) I brought from home. 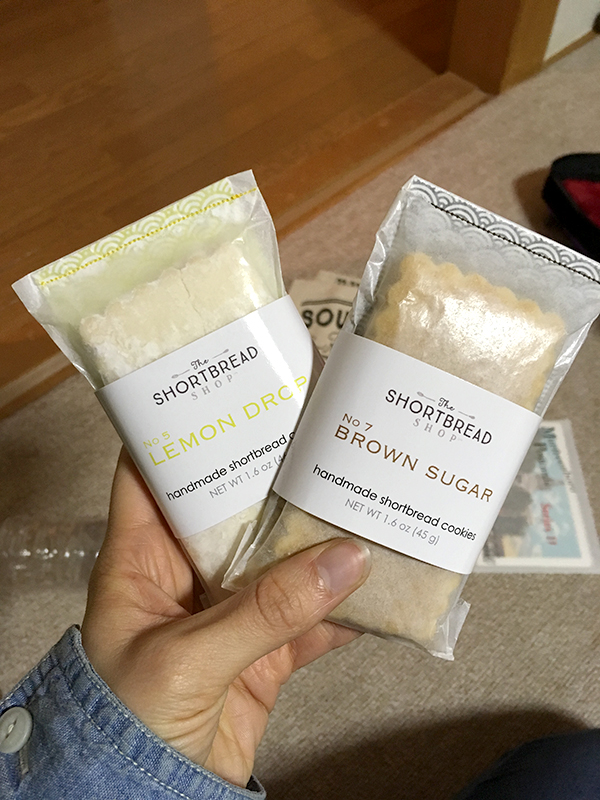 It was past midnight before I got in the bed, but at least my room was relatively in order. 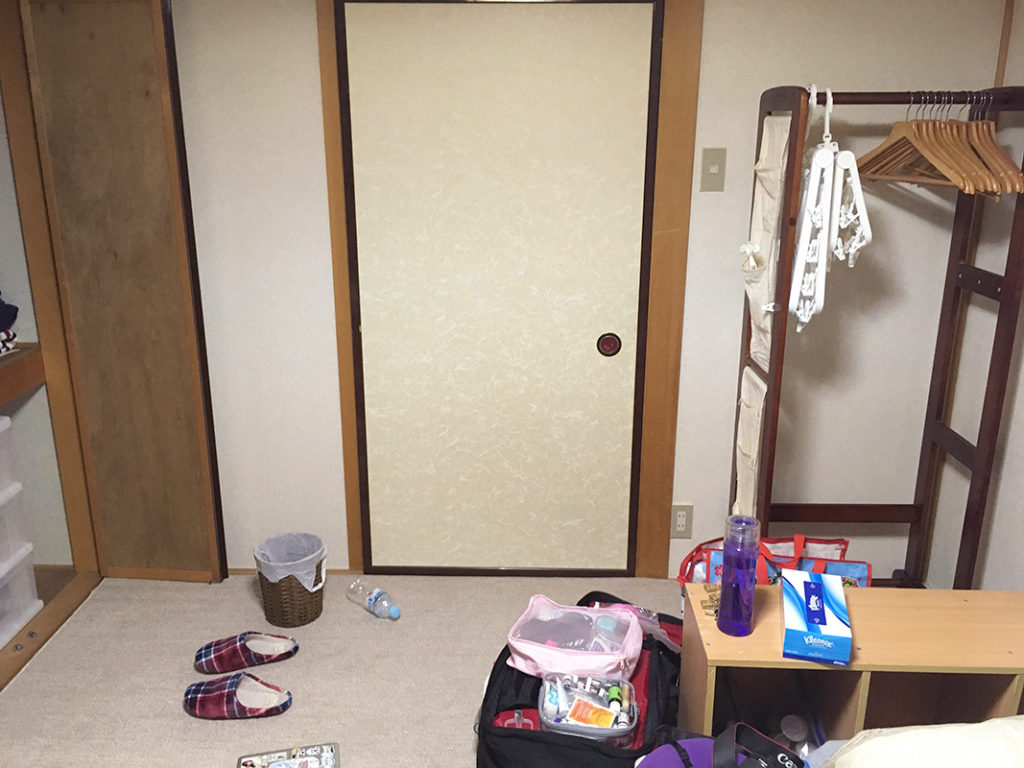 P.S. It was freezing (to me)!! They gave me a kerosene heater to use during the day, and let me borrow some jackets and a robe to use until the weather warmed up XD 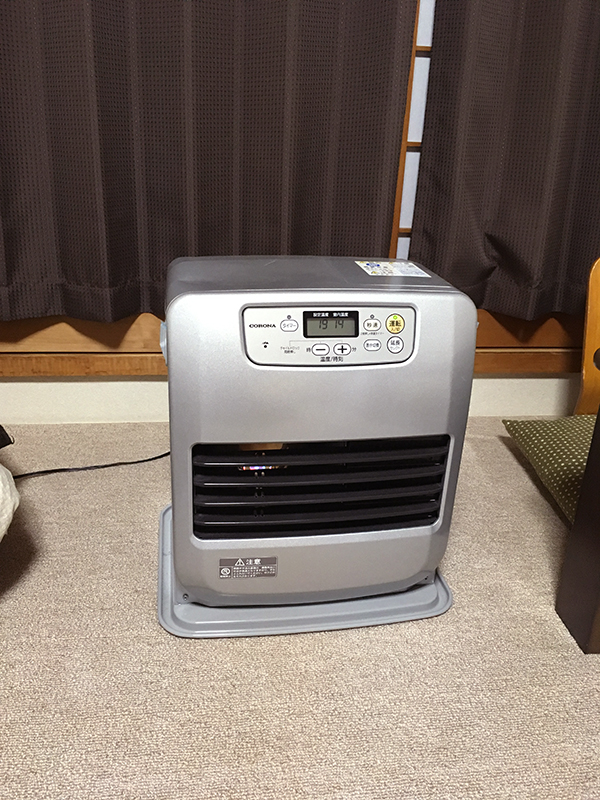 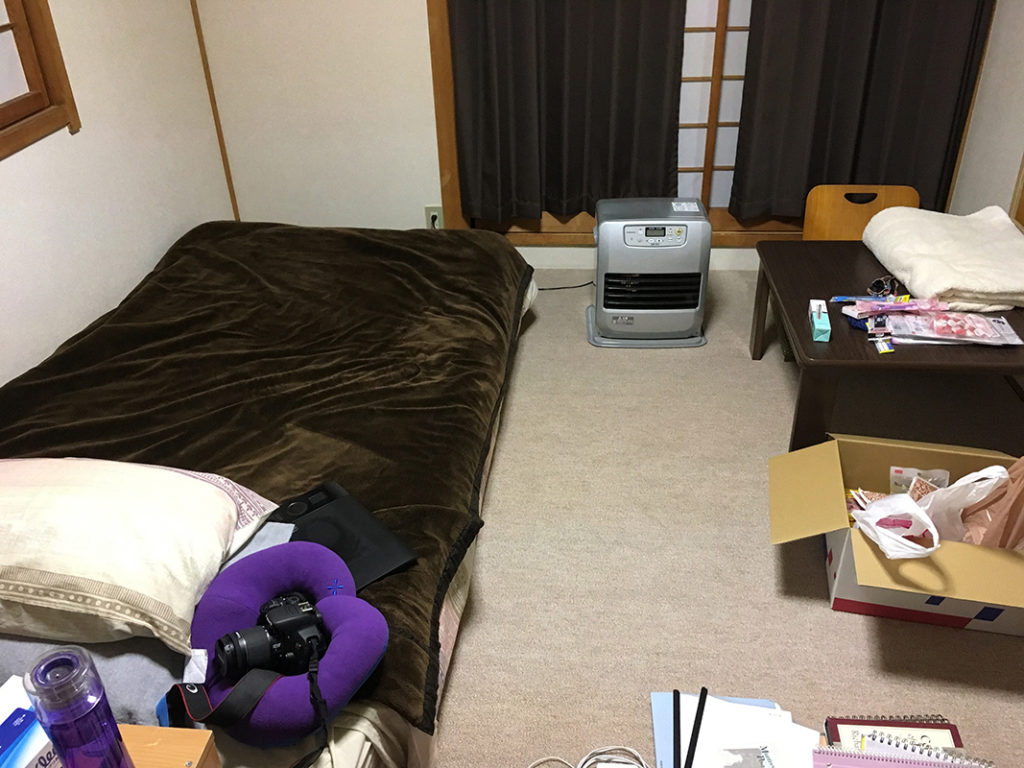 Regardless of the cold, I was excited because it felt like my trip was only just beginning. And really, that feeling hardly faded until I was on my way back to the States. Turns out three months goes by pretty quickly…