Hello and Welcome to Duel Cafe!

Born of a radical tournament idea, Duel Cafe serves as a place where duelists can improve their ranking before qualifying for the annual winter tournament. As for the weaklings who remain, let them eat cake (it’s really tasty).

Do certain characters remind you of certain things? Or do you associate a particular thing with a character? I do! Feast your eyes on the “Flavors” Course, a sweet but healthy mix of delicious designs and creative license. Enjoy!

An ongoing adventure with a heaping helping of humor and a dash of plot, detailing the various shenanigans which take place at Duel Cafe. Kaiba is not sure what to make of it all, but I hope you enjoy it as much as I do! XD

Would you like a souvenir to commemorate your visit? We have just the thing! 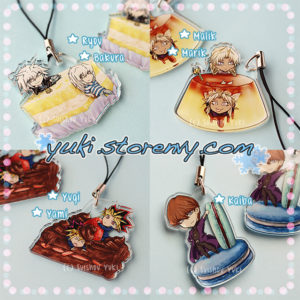 Duel Cafe ARTBOOK – $27 each
Every order comes with a free menu!

Duel Cafe SET B – $35 each*
This exclusive set includes the artbook and free menu, plus a limited edition print and sticker sheet!

*This set is only available until I run out of stock.

(Disclaimer: Yu-gi-oh! Duel Monsters belongs to Takahashi Kazuki-sensei. This is a fan project made for fun, by a fan and for fans ^^)