Kawasaki to Ochanomizu, and shinkansen to Fukuoka 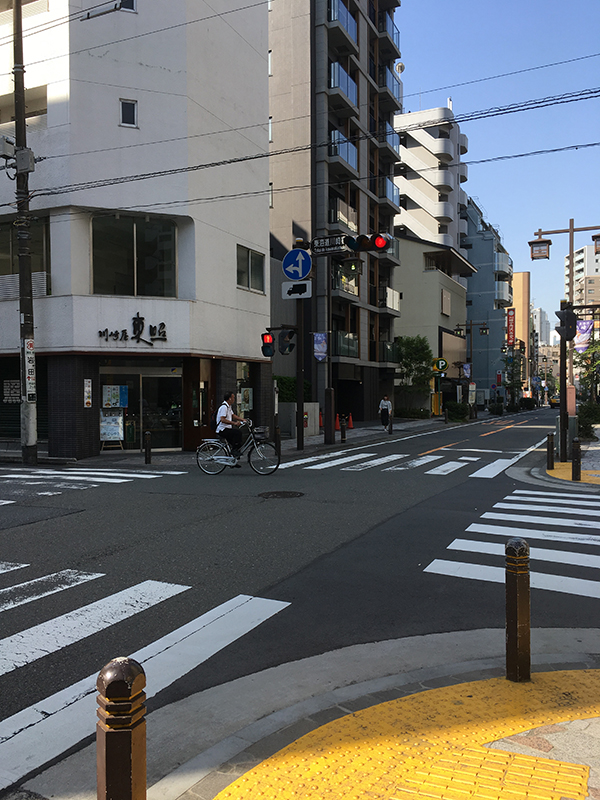 Sunday morning I elected to shower again since I wasn’t sure what the showers would be like at Sharely Style Hakata. I also decided to eat from my snacks and leftovers instead of the hotel breakfast. Even though I had a meal ticket, I knew I needed to leave the hotel by 8 AM, and after getting everything together, I just didn’t have the time. 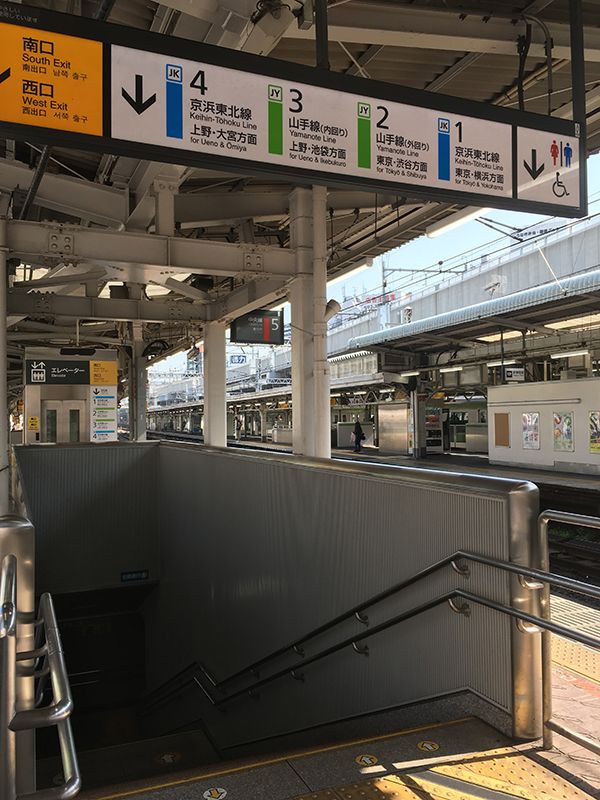 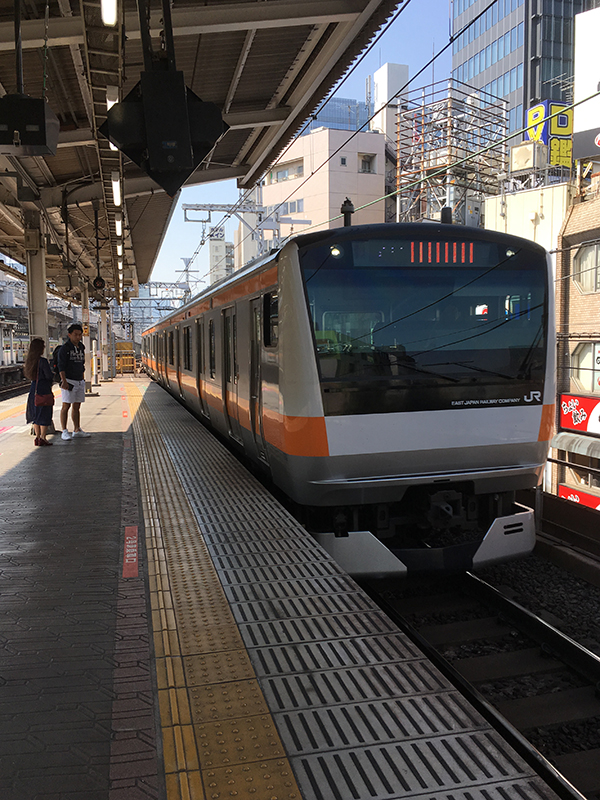 After making it to the station without incident, I successfully took a train to Ochanomizu Station, which is more in central Tokyo. Armed with screenshots of Google Maps and the Maps.me app Michael recommended, I plodded along until I came to a Starbucks I knew was on the way, and stopped there for a rest before getting to the church. 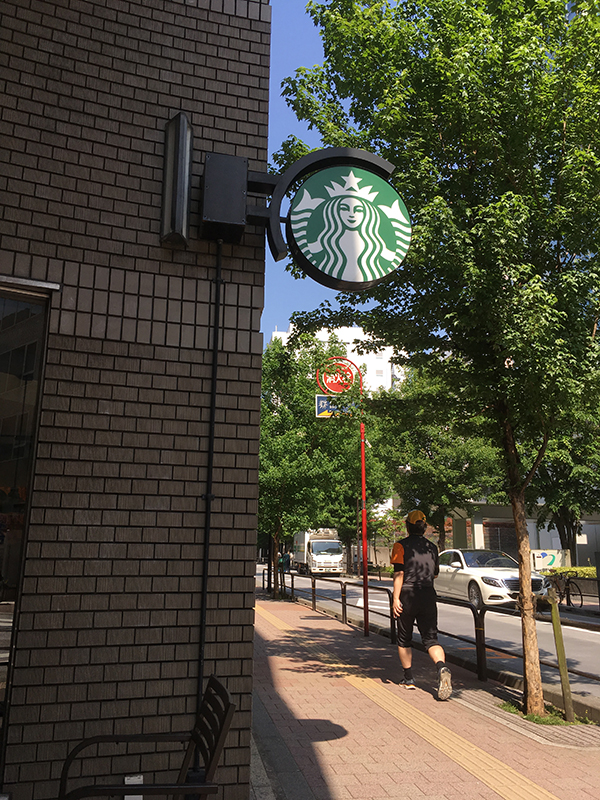 I also tried to connect to their Wi-fi to send my mom a message but the signal wasn’t strong enough outside the building. 🙁

Ochanomizu Church of Christ is seven stories tall, with an English chapel and a Japanese auditorium (chapel). After a kind, elderly man pointed me the way, I went to the English chapel and happily dumped all my heavy bags at the back of the room so I could rest for a while without them (lol)! 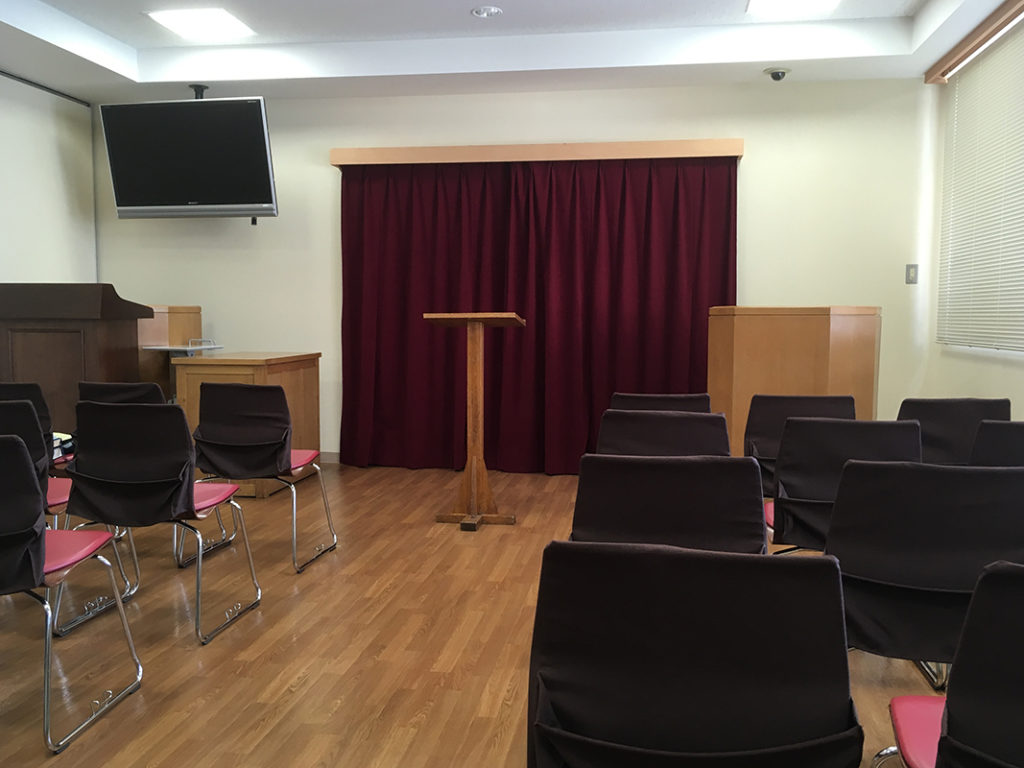 I can’t truly express how relieved I was to be in company with other believers after feeling so alone and lost in violent waves the few days prior. It was like coming home to an oasis in the middle of the desert after being lost in the shifting sands for days. 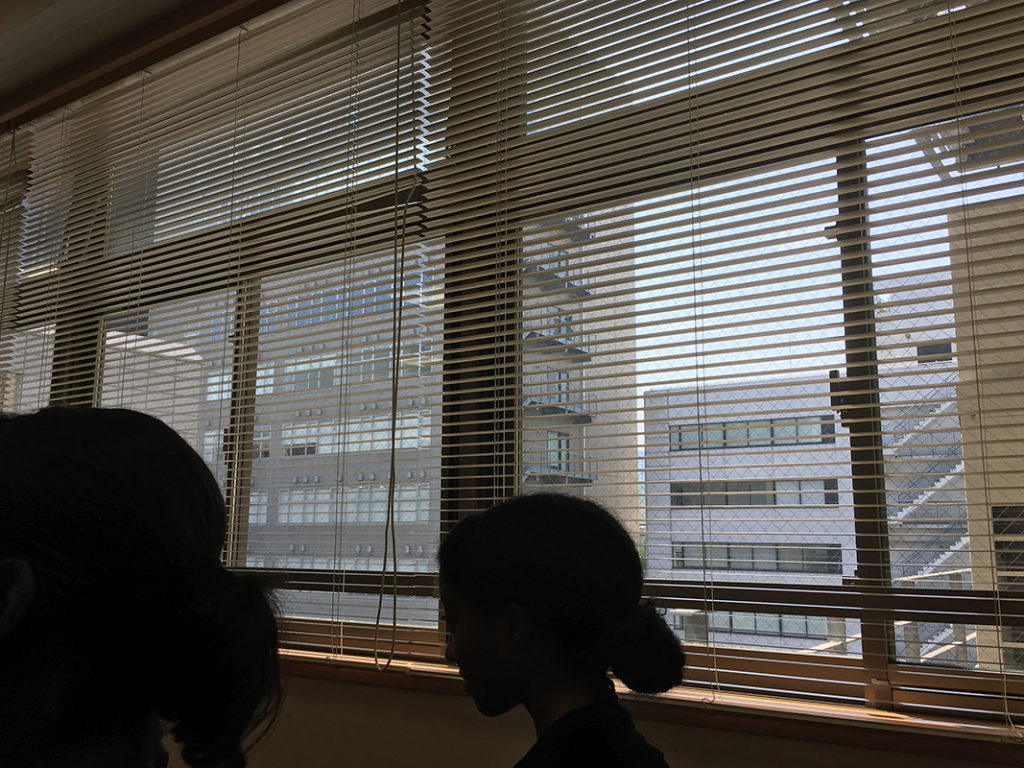 I met several other foreigners there, from places like the U.S., the Philippines, and African countries. It was so neat sitting there, taking in that setting. My home church, North Boulevard, is striving to be a multi-ethnic church, and this experience was a small taste of that.

Besides that, I’m just so glad that there are Christians in Japan, despite the number being so small. That small number still holds value and means something! And with God’s help, that number will grow.

A young man named Joshua gave an English sermon with a clear message: do work as though your only master is God, and don’t slack off or complain.

I can see how that sort of message could appeal to Japanese believers, because of their work culture. He suggested things like:

Basically, he was saying to find ways to be different (as a Christian) without pulling away from the workplace altogether. It gives us opportunities to witness to others.

We went to the Japanese chapel and joined the Japanese believers for communion, offering, and the rest of the service. They recognized their visitors – me included! – by having us stand in turn and greeting us with applause. At the end, some of them came up to talk to me.

Several people knew of the couple who recommended Ochanomizu to me, and told me to give them their regards! They also invited me to go on a historic tour with the ladies! I really wanted to go, but there was no way I would have been able to, given the time frame. 🙁 Instead, I stayed for lunch.

Ochanomizu always has a free lunch after the service, which was a blessing because I was starving. I ate some despite it being ramen (made with wheat). The other foreigners and I chatted about our experiences so far, what we like about Japan, and what brought us to Japan. Then I had to go…

Dahlia, a student from California who has only been in Japan about a week longer than me, helped me carry my bags to the station and saw me off. That meant a lot to me.

I was using my prepaid Suica card for traveling since I didn’t want to fiddle with buying tickets for every train. But you can’t exactly use a Suica for the shinkansen, so I needed to exchange my Japan Rail Pass at a major station.

I was trying to avoid Tokyo Station because I thought it would be crazy busy. It turns out Shinagawa Station is actually way busier and more confusing, so there went my attempt to avoid the chaos…

Just when I was starting to think I got the hang of navigating train stations, I proceeded to get lost in Shinagawa Station trying to find the counter to exchange my JR Pass. *rolls eyes*

You’d think, with all the foreigners in the station (there were quite a few), and Japan’s recent push for tourism, they would have a giant sign saying “JAPAN RAIL PASS EXCHANGE OFFICE THIS WAY!” They do not. There are little icons on the main signs, but you have to seriously hunt for it.

At last I found it. I don’t have any photos of it, but it’s in this wide, open room that has two levels to it, on the second floor, along one of the back walls.

After God helped me to find it at last – why don’t they have more signs for this stuff?? – I exchanged the pass and reserved seats for a shinkansen to Shin-Osaka. Reserved seats were full for the shinkansen to Hakata, so the lady wrote down what train I would need to get an unreserved seat on.

I was nervous about that, because there were only two trains going to Hakata that night after my arrival time in Shin-Osaka; one being several hours later and one being eight minutes later. I had to get to my accommodation before 9 PM to check-in, so everything was riding on me catching that earlier shinkansen.

I walked forever to get to the part of the platform where my reserved car would be, and was sore and confused. Thankfully I got on the right train with no problems. 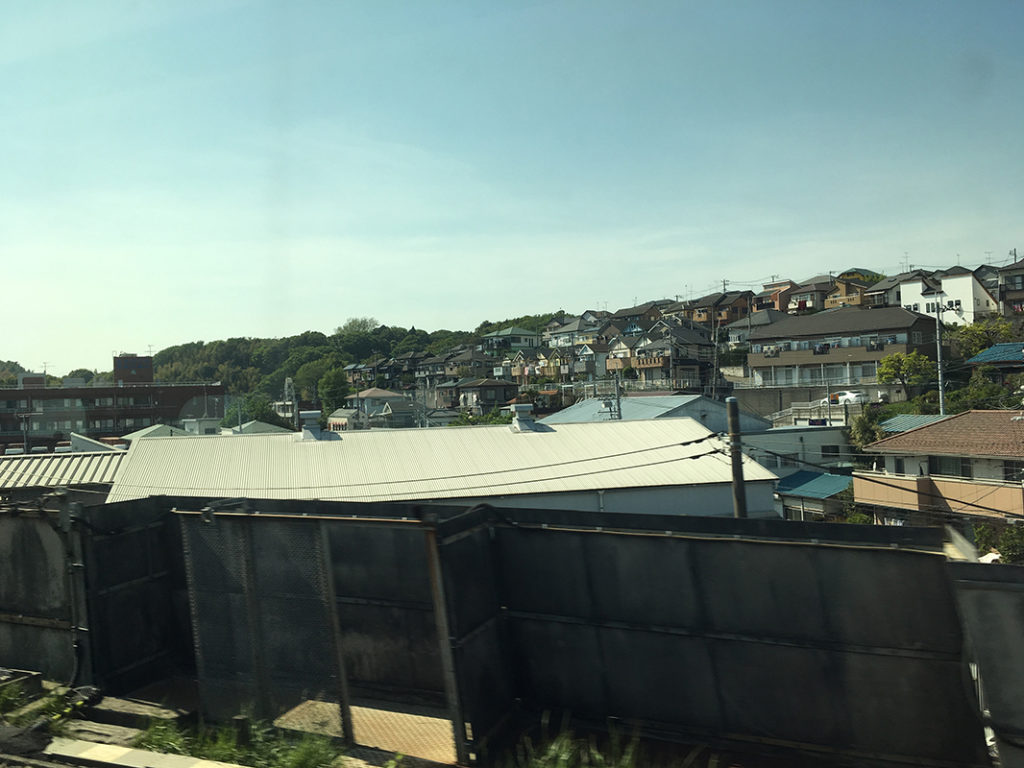 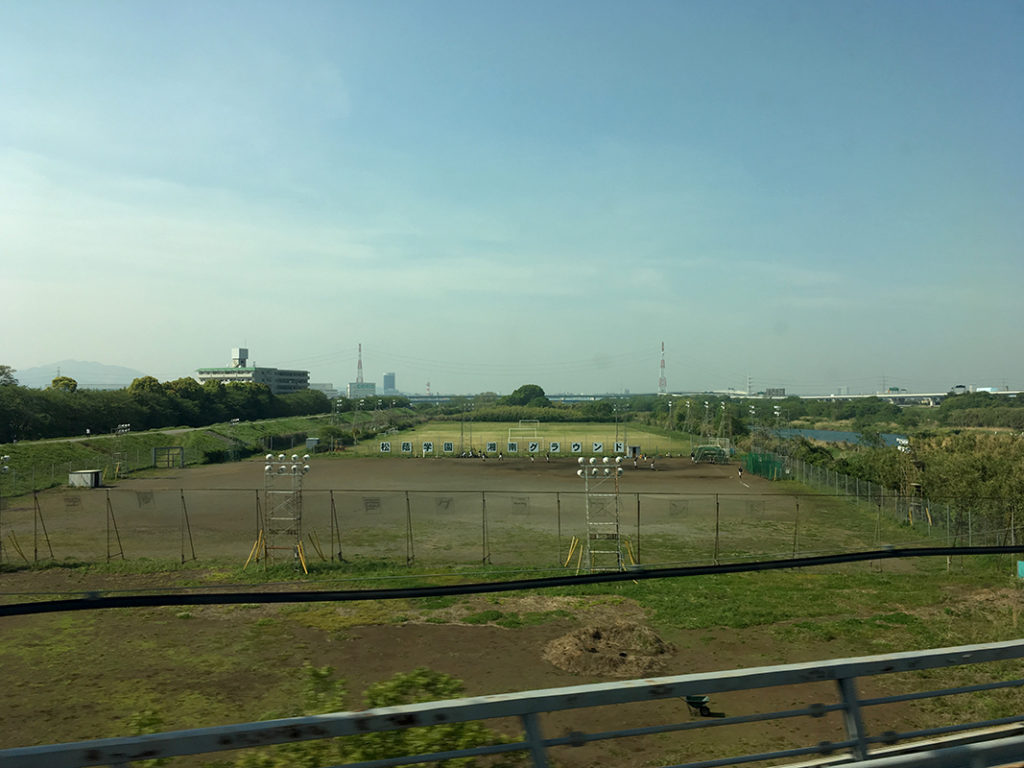 Hours went by with me in prayer, in thought, and watching Japan fly by my window. I kept praying so hard that I would make the next train because, again, I only had eight minutes to catch it. 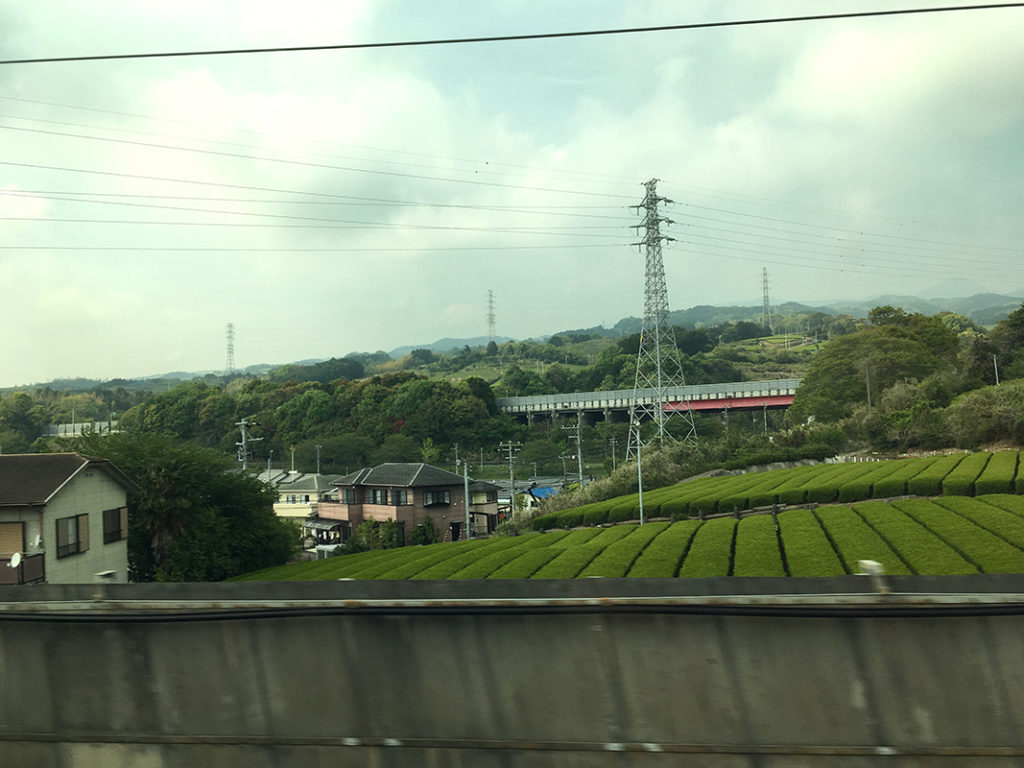 The seats were comfortable! I wanted to try to sleep since I hadn’t slept much since arriving in Japan, but I was so anxious about not wanting to miss anything that I didn’t sleep. 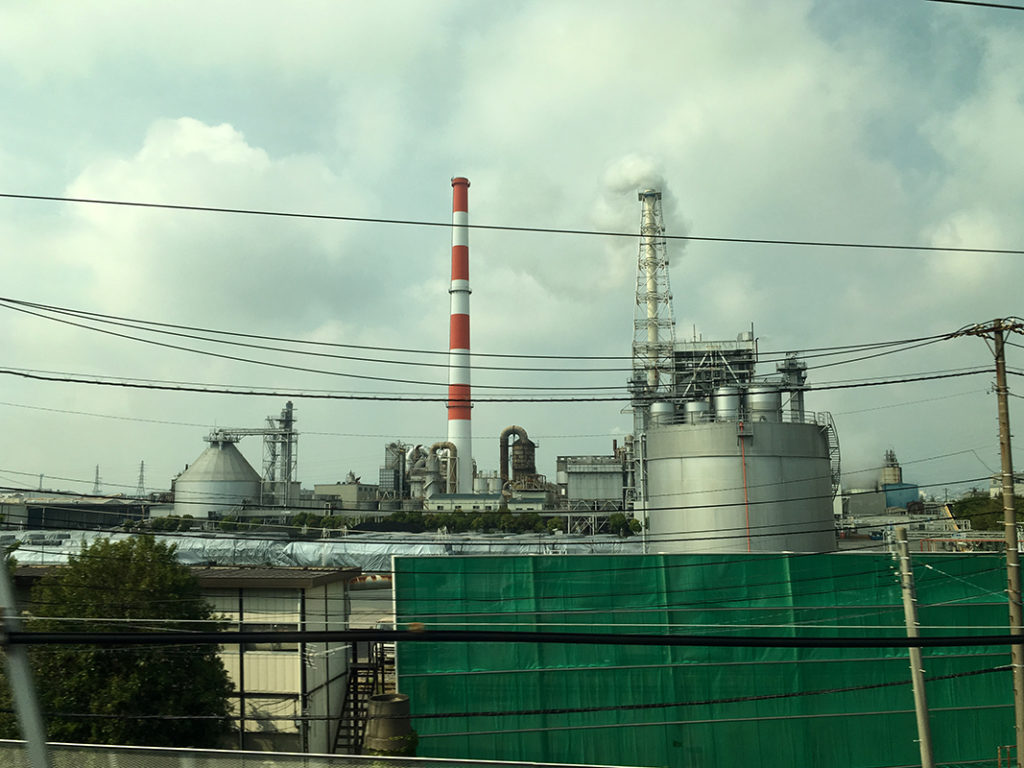 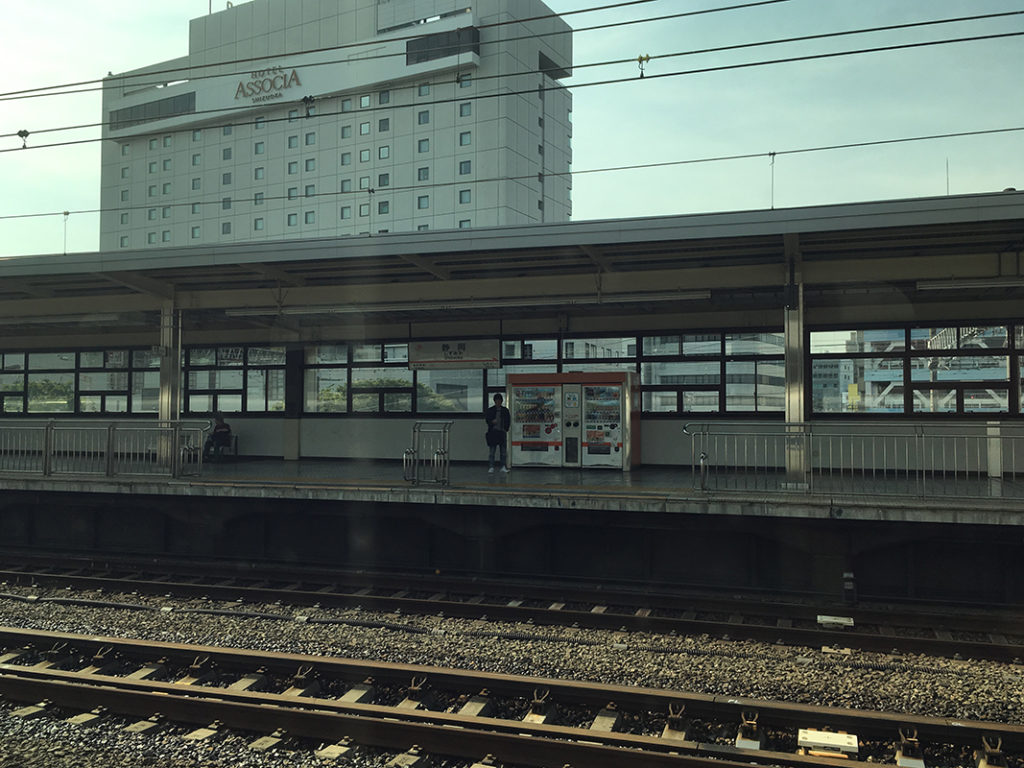 There’s something soothing about watching the scenery go by. I kept wondering, “What are the lives of the people in this town like? What are they worried about? What’s brought them joy today? How big are their familes? What do they do for a living?”

Every person has a story. 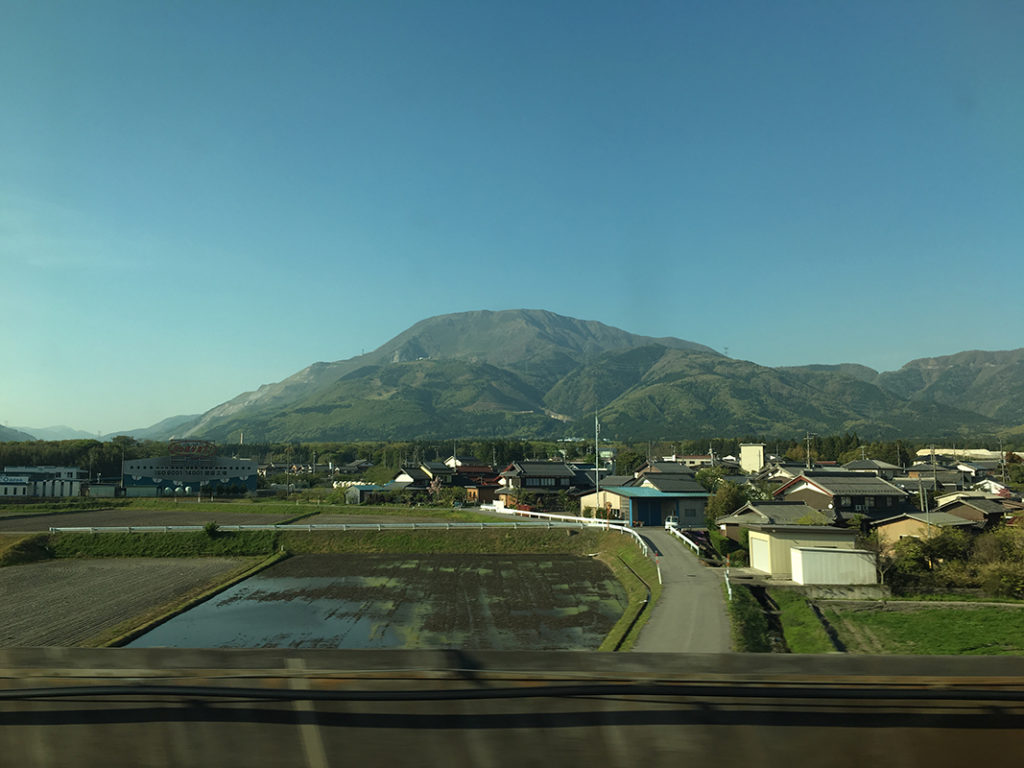 The mountains are so beautiful. 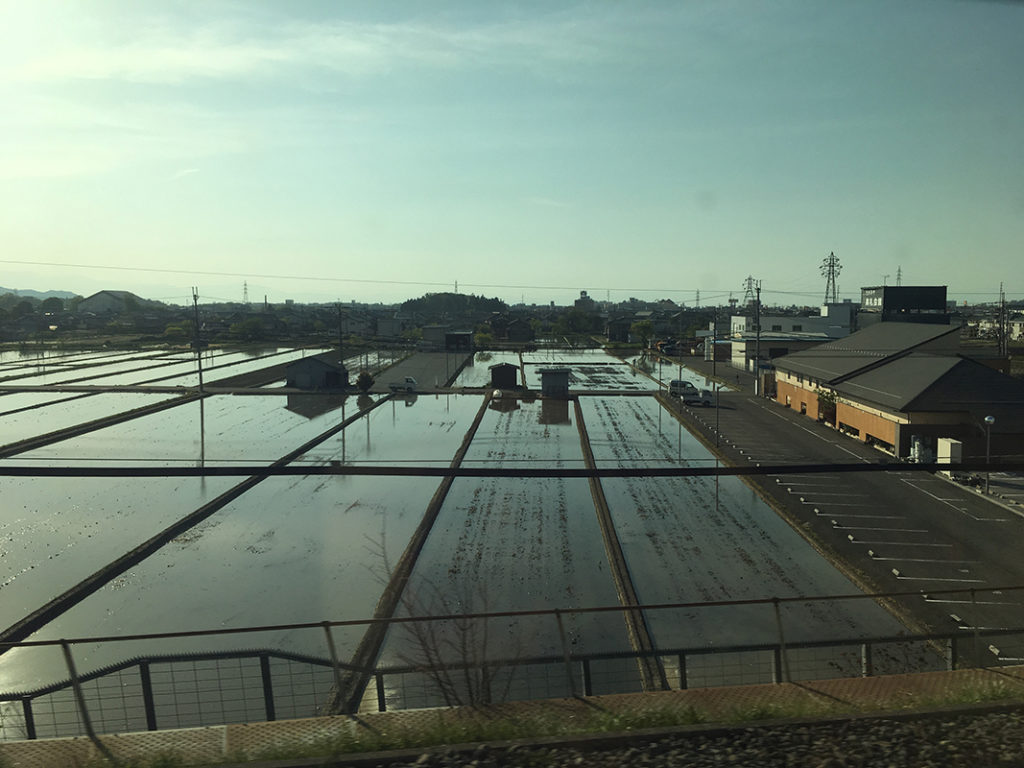 It’s common to see rice paddies right up against the road or parking lots like this! I was surprised. But there’s something beautiful about them as well.

As the time neared for us to arrive at Shin-Osaka, I asked one of the attendants what platform I needed to go to and how to get there. In the course of conversation, I learned that she actually speaks English! So the rest of our conversation was in both Japanese and English.

As soon as the train stopped, I made my way to an exit and booked it for the stairs. Thankfully, I found the next platform reasonably quickly and got a seat! Hallelujah! 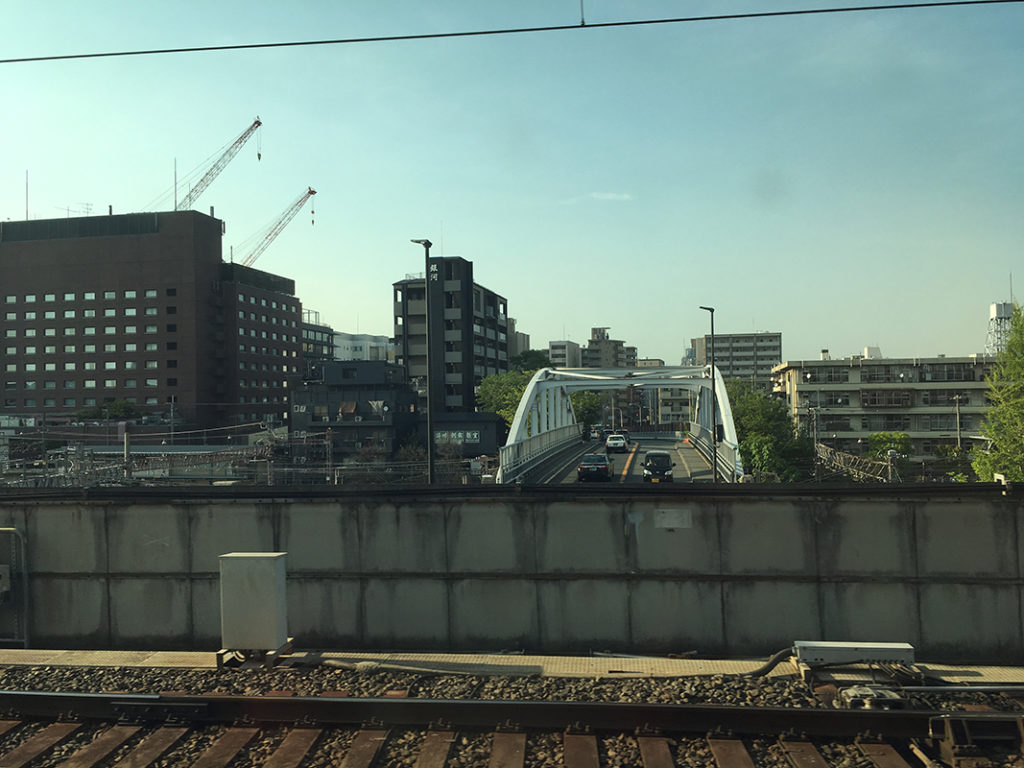 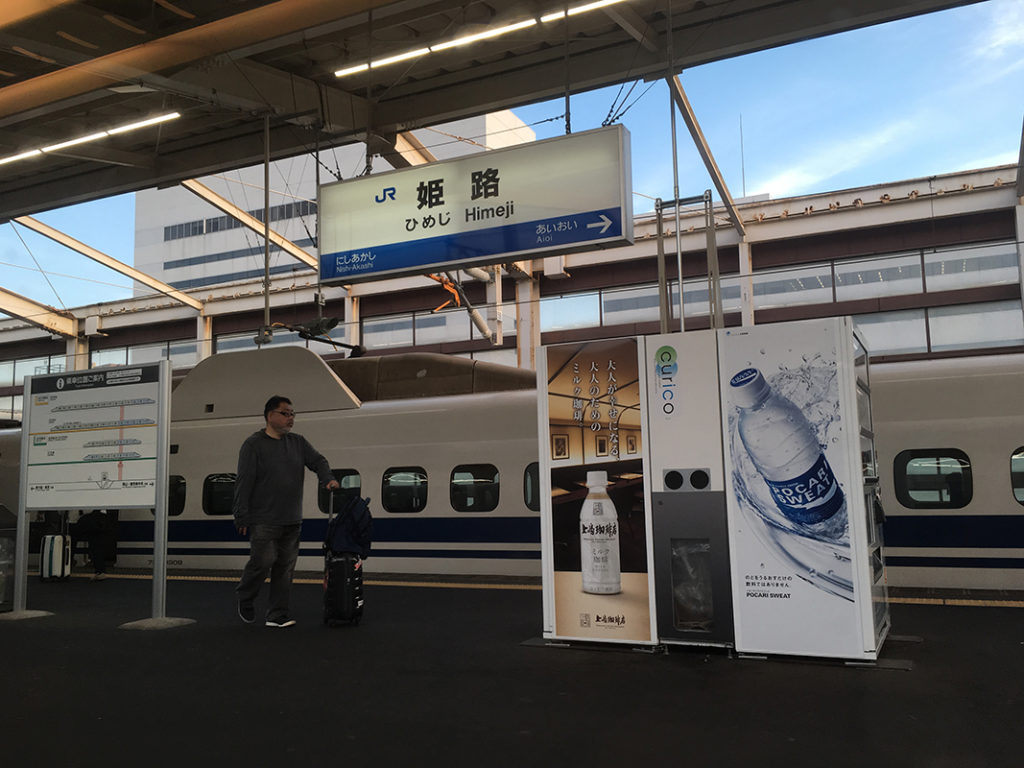 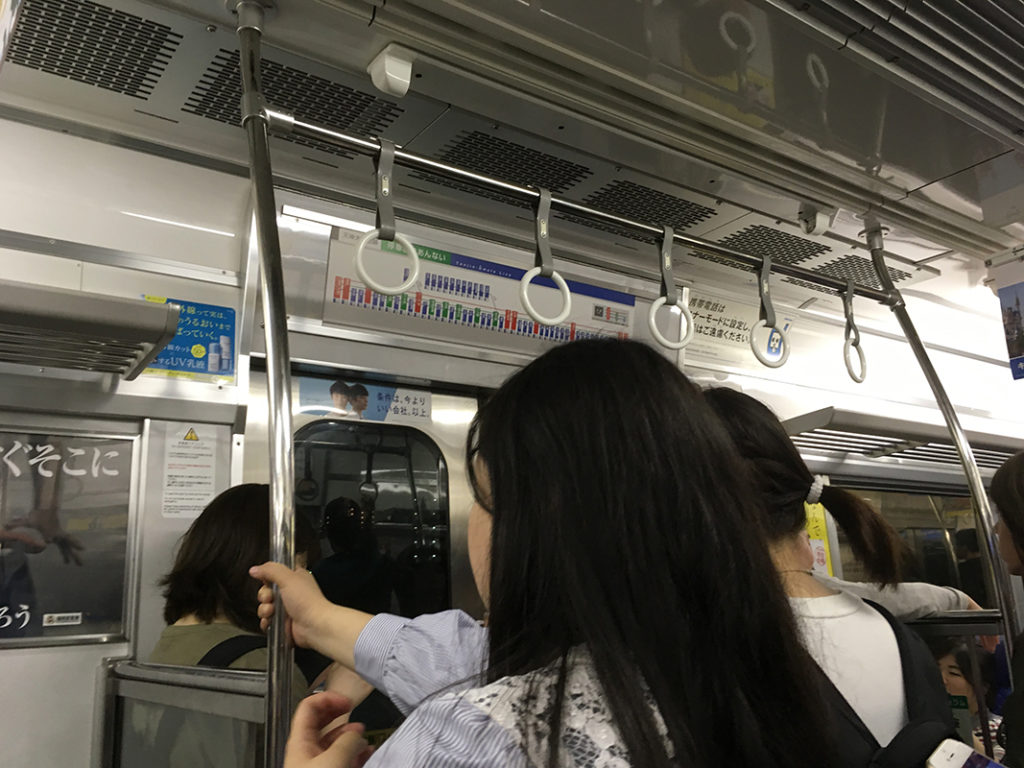 From Hakata Station, I took a subway to Tenjin Station, where I got lost. Again.

I tried asking some girls where to go, but they were also tourists (Chinese maybe), so they couldn’t help me. Finally I just stood there looking lost and a lady came over asking if I needed help. Praise God. He continues to guide and provide for me! I’m so blessed.

She explained that I had arrived on the subway, so to take the train I wanted, I needed to go to another section of the station (in other words, up). I mean, that’s so obvious, but I didn’t know where to go to to go “up!” She led me there via a mall shortcut, and then took me to a staff member at the information area who pointed out the train I needed to take. After thanking both of them, I headed for the platform and waited.

Both Ijiri Station and Sasabaru Station (the one I used later) are small. Thankfully I got to Sharely Style (my accommodation) without getting too turned around. Actually, because it was dark, it’s a miracle that I didn’t get lost that first night!

I showed up right around 9 PM. The receptionist, while kind, barely spoke English and gave me no instructions other than where to find areas with Wi-fi. She gave me a LAN cable for my computer, showed me to my room, and that was it.

I chose to count my blessings, contact my mom, and go to sleep. The next day, I would have to find GenkiJACS without getting lost. Thank God for their map!

2 Replies to “Japan Trip 2018 Day 5: Shinkansen from Tokyo to Fukuoka”