In 2016, Kentokyocon will be held in the Lexington Convention Center, on August 26-28, and I am happy to say I will be returning to the Artist Alley!

My mom said that I probably wouldn’t post this recap until after AWA. I assured her that wouldn’t be the case, but what do you know… (￣▽￣)  Well, at long last, here is my experience at Kentokyocon! 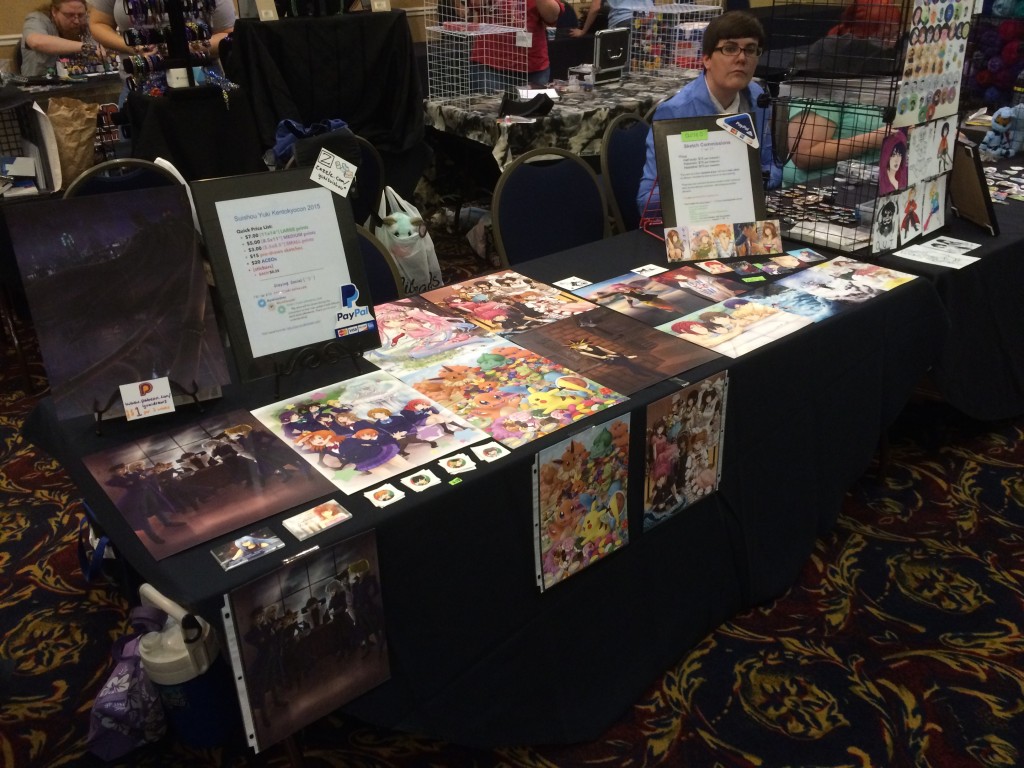 This was my first time going both to Kentokyocon and to Kentucky, though I ended up not seeing much of Kentucky besides what was alongside the road as we headed back home XD Since we arrived late at night and didn’t leave the hotel until check-out, I didn’t even know what the neighboring buildings looked like! Lol

The con, in its third year, was held in the Lexington Clarion hotel. My only experience with Clarion hotels so far has been staying in a decent room with basic amenities, where the hotel itself is fairly small and not much to look at. So it is understandable that my first impression of the Clarion in Lexington, despite being half-asleep due to our 1 AM arrival time, was “quality!” 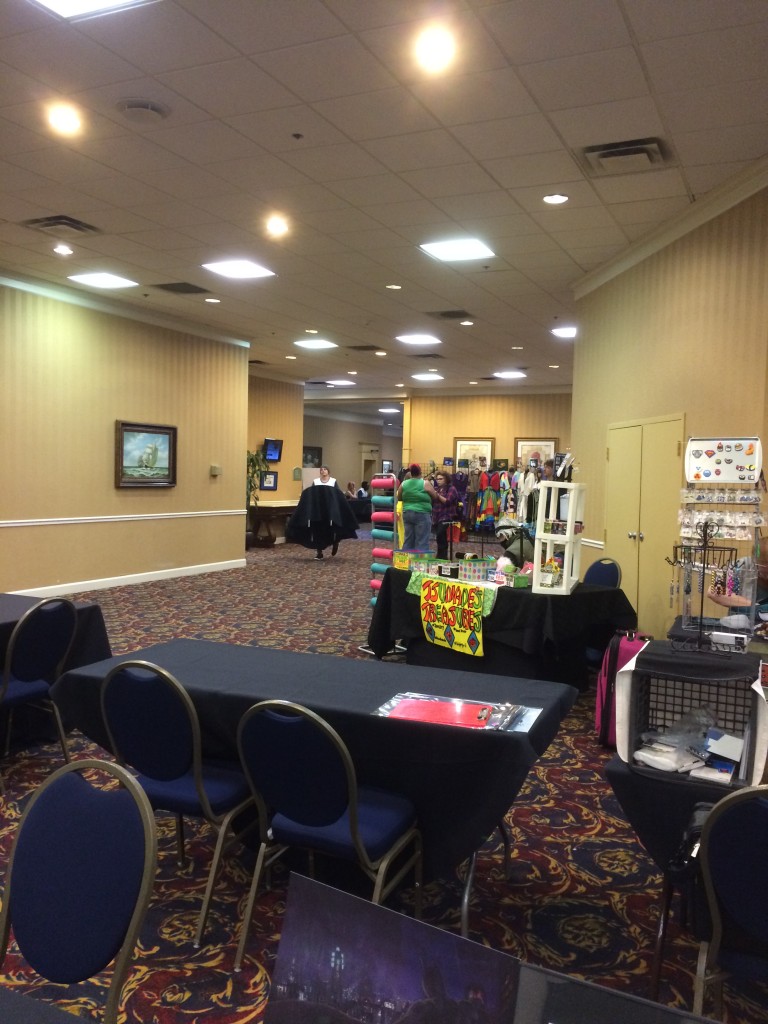 This hotel is spread out and has a good-sized convention space, with a welcoming lobby and nice rooms. It was definitely much better than what I had been expecting! Furthermore, our room ended up being ground-level, and only a number of steps away from the convention area itself. This meant that all we had to do was walk straight out from our hallway, pass by the dealer’s room and con advertisement space, and we were right in the artist alley. It was the most conveniently-placed stay I’ve had at a con so far, and that made it considerably easier to haul stuff from the room to the table–it was such a short walk!

As I mentioned, we arrived late (er, early?) but checked in with no problem. Con staff were still awake at that hour, amazingly, so we asked for additional badges for my dad and grandmother so that they could help at the table if needed. (Kentokyocon allows up to two additional table assistant badges for free(!!!!), which is amazing since usually you need to purchase extra badges for every assistant.)

The next day (well, the same day) began with a headache, but it wasn’t unbearable, so we went out to the con space in plenty of time to set up and wait for the “official” open time–though, since the artist alley was in an open area, if you were set up and at your table, you were pretty much ready for anyone wandering by. This first day was incredibly slow, which other artists who had been before said was normal. I got three commissions and only sold a couple of prints; a record low. XD

Because little action was happening and I was fading fast (I was overheated in my lolita outfit and the headache was getting steadily worse), we closed up early (around 3 PM) and headed back to the room. After getting my back and neck and such adjusted, and after eating, I felt well enough to walk around some, so we did.

We took our time walking around the artist alley, and then the dealer’s room. I only bought three posters from a dealer (despite having suspicions) and an adorable onigiri plushie from an artist.

Unfortunately, my suspicions were proved correct in that the dealer I bought from was selling stolen artwork. I searched online after we got back home, comparing a poster I had said looked familiar with a piece of art I had seen recently on deviantART. They matched. So if you come across the table of a dealer called “JPUS Enterprises Inc”, do not buy from them, or at least don’t buy their posters. They are more suspicious because even though they show up on all sorts of convention dealer’s lists, they have virtually no online presence and conflicting phone information. I will personally be avoiding them and be extra critical of dealers from now on.

Anyway… I typically don’t buy a lot at conventions, and that was the same here. XD; There were some other things I had wanted to get from artists, but the girls working the particular table kept setting up so late in the day that it was usually when we were closing down for the day, so it was inconvenient to make any sort of transaction.

Again, this Clarion was so much more than what I had expected. Beyond the artist alley, there was a guests-only area that contained a big pool, hot tub, arcade area, basketball court, concessions stand (which was closed), eating spots, and an area set up for the game of horseshoes.

After walking around, we headed back to the room, ate dinner, and hung out until bedtime.

Day two started out fairly well, with me needing another adjustment because my head was still hurting, but getting better from there. I completely forgot to put on makeup for my Kotori cosplay but I suppose it’s okay since I never wear makeup anyway ^^; I sold several prints and got some sketches done, one of which sold by the end of the day, but in the afternoon it got rather sleepy and I finally got so bored I made a sign that said, “Commission me! I’m bored!” I actually did get a commission after that, but I don’t think they saw the sign since I only held it up for a few seconds XD

One major highlight of this day was getting to meet family I hadn’t met before! An uncle lives in Lexington and Nana contacted him beforehand to see if we could see him and his family sometime, and he and one son (so, my cousin) came on Saturday to see us. My cousin looked around and went to panels for a lot of the time XD He seemed to enjoy it, so I’m glad. All of us got to talk with both of them at some point, but we definitely spent the most time talking to my uncle.

I also met some people who recognized me from MTAC, which was neat XD One showed me they still have the things they bought from me in their artist bag! That made me happy ;v;

The Saturday of conventions is usually the biggest day (I think), and while there definitely was more traffic, it still wasn’t as much as I would have expected, though certainly other artists did quite well on this day. ^^ One thing I learned from this convention was that different areas have different interests, so that’s completely understandable. Lexington had more people interested in American shows and shows I hadn’t heard of, as well as classics like Sailor Moon that I’ve never watched. ^^; My prints that usually move well didn’t here, while prints that usually don’t move (such as my originals) sold several copies. It was really interesting.

Sunday was a slow day sales-wise, but I sold several of my original prints that tend not to sell as much, so that made me really happy. :3 We left early in order to get back home with enough time…and to save my dad from sheer boredom. XD

I was terrible at making efforts to record anything from this trip, so I apologize for the lack of photos.

A few people mentioned that they hoped to see me back, and I think I wouldn’t mind doing so. I would like to use conventions as ways to visit family anyway, so I think that it would be nice.

Thanks for reading! ^o^